At Surajpur a stitching and sewing school was opened in April 2005, where sewing and needle work courses are offered to enable women to earn their own living. Also, a training for nurses is planned for the future.

Untrained workers can undergo a job-training in the workshops at Kirpal Sagar, which also provide jobs for people with disabilities.

Since the year 2008 seminars for women empowerment are organized by the B.ed.College at Kirpal Sagar.

In the Indian culture, marriage plays an important role but wedding ceremonies are very expensive. Consequently, Unity of Man helps poor families by arranging the wedding and the furnishings for the couples to give them a good start in their family life. The marriage ceremonies are celebrated according to the religious belief of the couples. The newly married couples receive basic equipments needed for a new household: a fully equipped bedroom, furniture for a living-room, kitchen utensils as well as clothes and watches, everything sponsored by Unity of Man.

Further help is supplied in case of disasters. During the big flood in 2010, two truckloads with emergency supplies were sent to the city of Leh, Ladakh.

Since Kirpal Sagar has its own water supply, big water tanks are put up in neighbouring towns during a big drought, to supply people passing by with drinking water.

The size and variety of the now existing facilities enable to quick and flexible reactions to emergency situations. In the home for the elderly for example orphaned children could be accommodated together with their grandfathers.

"Do unto others as you would have them do unto you". God is immanent in every form, and whoever loves God must love God's Creation. To love God is to love all humanity. 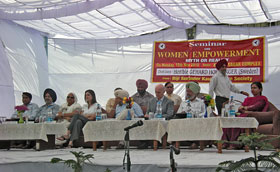 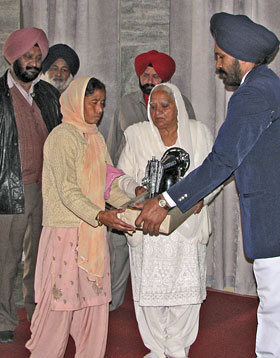