Kirpal Sagar has been built over 35 years by a comparatively small group of people, led by two extraordinary personalities: Dr. Harbhajan Singh and his wife Biji Surinder Kaur. They spent their entire lives working on the Kirpal Sagar project, which Sant Kirpal Singh had entrusted to them.

Volunteer workers from different countries, who participated in the project from the very beginning, experienced Kirpal Sagar as a ‘man-making’ center, in which each one proceeded through a personal process, through which one could be enriched. It is a known fact that you get a lot back in the intangible realm when helping others – such as reflecting joy, trust, strength, and more. Hope and confidence are also created in addition, and that it is possible at times of great uncertainty and seemingly irresolvable crisis, does not only lie in the field of social engagement.

It is the spiritual basis, the awareness or consciousness that a Higher Power is working in man, which can allow man to grow beyond his limitations.

Kirpal Sagar itself exemplifies how the seemingly impossible can be realized by trusting this Higher Power and using one’s own abilities. It arose out of nothing, almost without any means, at a time of great difficulty in India. It is a visible sign of what is possible when we orient our lives towards higher values.

Kirpal Sagar is not simply an Indian project. It was open to everyone from the very beginning. Its symbols stand for the whole world and point out the possibilities in man.

We just have to seize them! 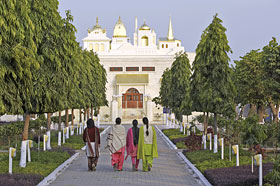 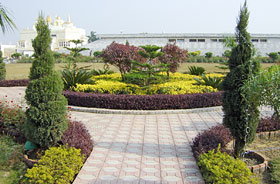