In the year 1970 Sant Kirpal Singh founded his first "Man-Making-Center" Manav Kendra at Dhera Dhun in the north of India near to the Himalayas. The basic idea behind this center was, to create a place, where members of all faith, castes, colors and creeds could come together under the roof of the one Almighty God and selflessly work together for humanity.

The work there went on under His guidance till 1974, when He left His physical body. During this time He trained all, especially those, who worked there, to become true disciples of this highest Power. But only very few could really learn this lesson at that time and seeing the situation, Sant Kirpal Singh then announced, that the real Manav Kendra, which He wanted to built, was still not under construction and would be built later on.

Then, on his last tour in the Punjab on 24 October 1973, Sant Kirpal Singh, accompanied by Dr Harbhajan Singh, visited the grounds where Kirpal Sagar is located today.

In those days most of this area was barren land covered with shrubs and often flooded by the nearby Sutlej River. There Sant Kirpal Singh owned a little farm where rice was just being harvested.

That day Sant Kirpal Singh took some water from the water-pump, which still exists today, and tasted a grain of rice. Pointing to the surrounding land Sant Kirpal Singh told Dr Harbhajan Singh that at least 40 hectares of land would be needed, and that a time would come when more than 800 kg of pulses would be required daily. And so He commissioned the future Manav Kendra at this place.

To hand over the work to the whole humanity, Sant Kirpal Singh held a World-Conference on Unity of Man a few month later in Delhi and announced there:

“The work of the Conference will be carried on much further, each time we see that God is working through our neighbor, our brother – through all men; each time we resist the temptation to consider our welfare ahead of that of our brother or sister; when we see that every human being we meet is a child of God. Our common aim should be to alleviate men’s suffering and reduce their separation. In that sense this Conference will never end.“
Kirpal Singh

And today there are a lot of people, who consciously are helping mankind in many ways, only because they are guided like this from within. They're not after any outer masters or titles or positions for themselves, but they follow their inner voice knowingly or unknowingly as disciples of that Almighty Power, which is One for all of us. For them, Kirpal Sagar is their own home and so, in reality, we cannot invite them ... because this unity already exists and we have not forgotten and remember it! 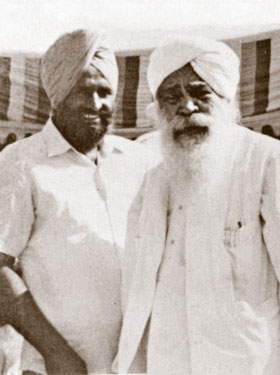