The Sarovar is the center and the heart of Kirpal Sagar. The oval-shaped water pool of the Sarovar is surrounded by four corner buildings. Here, Holy Scriptures such as the Guru Granth Sahib of the Sikhs, the Ramayana of the Hindus, the Bible of Christians, and the Koran of Muslims have their place.

There are also worship services and recitations from the respective scriptures, showing that in Kirpal Sagar every religion is respected, but no particular religion is taught. Overall, the symbolism of this place speaks for itself and reminds us of the purpose of our human life. The water of the Sarovar symbolizes the ocean of life man has to cross to reach his eternal home. The mystics of all religions tell us that we can experience God in us. In all temples and places of worship in the East and West, we find light sources such as candles or oil lamps which remind us of the inner Light. Sounds of bells, gongs, or conches point to the inner Sound.

Light and Sound are the two aspects of the Godpower
manifesting in man.
In the scriptures of the religions they are referred to
as Naam or Shabd, the Word, Udgit, Naad or Kalma.
The spiritual teachers of mankind are unanimous
in telling us about their inner divine experiences
which they also could convey to others.
It can also be described as the inner religion,
which is the same for everyone.
Sant Kirpal Singh

God made man and man made religions
God made man and man in course of time made religions as so many vehicles for his uplift according to the prevailing conditions of the people. While riding in these vehicles, our prime need is to raise our moral and spiritual stature to such an extent as to come nearer to God and this, it may be noted, is not merely a possibility but as sure a mathematical certainty as two and two make four, with of course proper guidance and help from some adept well versed not only in theory but also in the practice of the science of soul.

Reclaim your lost heritage
The most pressing need of the time, there, is to study our religious scriptures thoughtfully and to reclaim our lost heritage. A Saint says: "Everyone has in him a pearl of priceless value but as he does not know how to unearth it, he is going about with a beggar's bowl."

The science of the soul
It is a practical subject and even to call it a religion of soul is a misnomer, for soul has no religion whatsoever. We may, if you like, call it the science of soul, for it is truly a science, more scientific than all the known sciences of the world, capable of yielding valuable and verifiable results, quite precise and definite.

By contacting the light and life principles, the primordial manifestations of God within the laboratory of the man body – which all the scriptures declare to be a veritable temple of God – we can virtually draw upon the bread and water of life rise into Cosmic Awareness and gain immortality.This is the be-all and end-all of all religions.

Embedded as we all are in the one divinity, we ought to represent the noble truth of the fatherhood of God and the brotherhood of man. It is the living word of the living God and has a great potential in it. It has been rightly said: "Man does not live by bread alone but by the Word of God."

An immutable law of the unchangeable permanence
It is that knowledge by knowing which everything else becomes known. This is an immutable law of the unchangeable permanence and is not designed by any human head. It is the Sruti of the Vedas, the Naad or Udgit of the Upanishads, the Sarosha of the Zend Avesta, the holy spirit of the Gospels, the lost word of the Masons, the Kalma of the Prophet Mohammed, the Saut of the Sufis, the Shabd or Naam of the Sikh scriptures, the music of the spheres and of all harmonies of Plato and Pythagoras, and the voice of the silence of the Theosophists.

It can be contacted, grasped and communed with by every sincere seeker after truth, for the good not only of himself but of the entire humanity, for it acts as a sure safety valve against all dangers with which mankind is threatened in this atomic age.

True religion tells us to come together under one roof and think of Him. 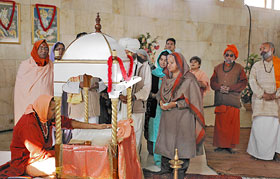 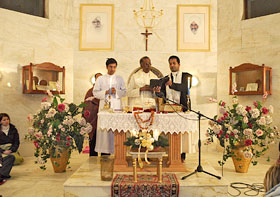 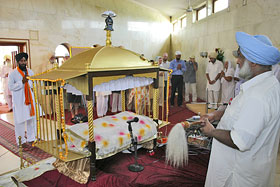 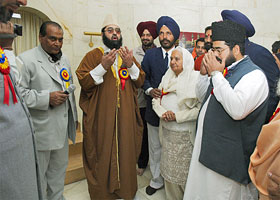 Read more:
"Spirituality - what it is"