01c. Who is guiding Kirpal Sagar

Who is guiding Kirpal Sagar?

Maybe you can feel, that Kirpal Sagar is a very special place.

Powers like Sant Kirpal Singh never die and they can manifest in any form, wherever their presence is needed. Even if they don’t manifest physically, they see through the eyes of humanity and our own eyes and inspire us, to improve what still seems to be incomplete. They are not the Masters, which we may know from the history – they are the guiding powers through ages and at the transition time from the "Iron Age" to the "Golden Age", this Power always works as one.

Therefore Dr. Harbhajan Singh and his wife Surinder Kaur continued the work after the physical departure of Sant Kirpal Singh, as per His wish, to develop Kirpal Sagar and to spread the liberating message of that Almighty Power everywhere.

From the very beginning, Dr. Harbhajan Singh said, that this place (of Kirpal Singh) would remain empty and could not be taken by anybody (such as a spiritual successor; ie from one Master to the next one as was common previously). But He invited all to become a part of His further work, because Sant Kirpal Singh wanted to do this work now through thousands of hands.

So the wish of Sant Kirpal Singh to build up Kirpal Sagar became true, but that work is not finished at all. Even now, after both (Dr. Harbhajan Singh and his wife Surinder Kaur) also left their physical bodies in 1995 and 2016, His and their guidance and support are still there for all who participate in this work. Like Kabir once said:

“All are searching for God – but God searches for a true man ... and now He is after me like anything!” 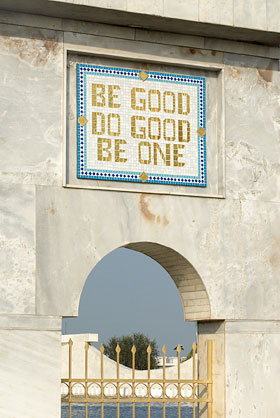 We are all one, it is true,
but we have not yet become one.
When will that be?
When we will see Him in all
and all in Him.